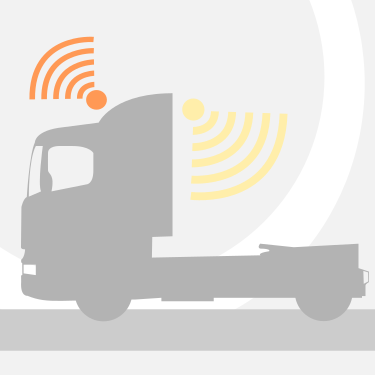 The Questions in this survey were put to fleet managers and owner operators over the telephone and it uncovered some interesting information.

Owner operators and fleet manager mentioned how tech makes their haulage business more efficient. This in turn is allowing them to make more money. We also heard about how tech was making their day to day work more enjoyable.

Looking at the results of the survey we understand better how hauliers use gadgets and apps, and also to learn about some of the lesser known innovations.

Most are never far from their mobile phone and truckers are no exception. Almost every respondent said mobile phone is the number 1 innovation they could not live without. This is one of the three communications tools that were frequently mentioned, along with social media and Skype.

Going back as far as 2012 surveys have demonstrated that mobile phones are a useful device for truckers, at that time 43% of truckers had an app they were using for business. A recent survey, also looking at truck drivers and technology, conducted in the US, reported that truck drivers mobile phone usage has increased by 60%, and this has been fueled by the use of mobile apps.

Anyone on a long journey knows how important a great sound system is. So, it should not have been a surprise that truck drivers highlighted plenty of audio apps and tech.

Spotify was an audio app that got many mentions. Plenty of the respondents are turning their trucks into wi-fi hot spots and eating up lots of data streaming music. But, offline syncing tools were also mentioned as an important feature of this app.

Other suggestions for audio apps included audiobooks, and even an audio language learning course. Beyond apps, internet radios and DAB radios were suggested as important technical innovations.

Telematics are a range of tracking devices installed in a vehicle to share data. One example consumers love is real time delivery information. But, telematics are offering advantages to truckers themselves.

Truck fleet managers, were keen to mention how the end of paper log books had benefited them. One Fleet manager explained how, monitoring their drivers’ behaviour using the latest fleet insurance with telematics, has made their fleet safer.This has in turn reduced costs and allowed them to reward their drivers appropriately.

The US government has also decided on the importance of the end of paper log books, and by the end of this year Electronic logging devices will be mandated.

However the aspect of telematics for a lorry that drivers themselves appreciated most was GPS.

Bridge heights, weight limits and width limits now programmed into the GPS allows drivers to plan the most efficient routes. GPS systems are plentiful and with bigger screen sizes more suitable for a large truck.

“A map is an essential part of route planning, and a great way to learn networks on road, but nothing is more useful than a sat nav for the last few miles of driving”

We had not heard of this type of website before, but one customer told us that the advent of same day delivery is changing the shape of haulage rapidly. These changes have resulted in a number of online services which have been described as the uber for freight! These include websites such as Freight Exchange and Return Loads. Hauliers surveyed said are seeing benefits to their bottom line through this type of innovation.

Many of our customers spend long hours on the road, and often are apart from their friends and families. Social media allows hauliers who are working away to stay in touch and keep up to date.

Skype is another important which helps our customers keep in touch with their families. It was interesting to also learn this tech tool was also important when it came to business. Truckers were the original remote workers. As such fleet managers are aware of the importance of communication in managing an effective team. More than one of our fleet managers surveyed mentioned Skype as a useful tool for their team meetings.

Thank you to all the respondents and the organisers of this survey. It was interesting to learn about the technical innovations in this niche sector.