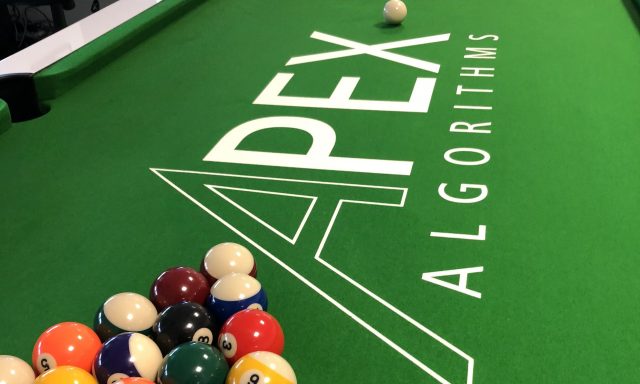 Quite a lot has changed since we last visited Apex Algorithms in October of 2018.  In addition to their smart office in Deal in Kent they have now opened a second office in a modern building near to Liverpool Street.  Offices aren’t the only addition in February of 2019 the owner appointed Paul Northcott as the Managing Director. The interesting thing about Paul is that he was an investor for two years before joining the company so had already witnessed the powerful growth in his own account.

Apex have also extended their offering they now offer models on two different sports with a view to adding a third later this year.  The first model called Magnus Ludum is what they started with in 2013. Magnus Ludumis designed to take advantage in mis-pricing of the football markets.  They have developed a sophisticated computer algorithm that through assessing over 40 different parameters determines the probability of an outcome in the major leagues across Europe.  The Algorithm then checks to see where the markets are offering better value and then places a bet. Returns vary but as an example 2019 had 49 winning weeks in the range of 0.08% to 2.63% and three losing weeks ranging from -0.16 to -0.48%.

The second model called Pegasus is a horse racing model that they have been offering to clients for the last 15 months.  In the first year the pay-out was 22% tax-free and the profits were returned quarterly and the capital amount at the end of the year.  They were delighted that following the return of capital there was a 100% uptake in reinvestment.

You can start an account with Apex with as low as £2,500. Register here for full details.

As well as algorithms the company also likes to invest their profits back into interests the clients and staff have such as owning shares in a horse through a racing syndicate. The team at Apex attend race days across the major courses including Ascot, Cheltenham and Newbury. The purchase of these shares means they are keen to get investors involved by holding events at the courses in 2020 so everyone can enjoy the day.

In 2019 Apex attended 4 business/investor exhibitions across the UK allowing potential clients to ask questions and meet members of the team. They regularly meet the clients and hold events for account holders to attend.