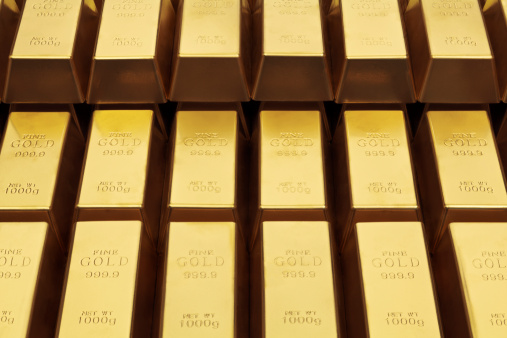 The world today is facing a financial crisis due to the economic slowdown. The U.S. dollar is losing value and there is a rise in the prices of commodities. The stock market has become volatile. As a result, there is an increase in gold investments, because the position of this precious metal in the market is known to improve under the above mentioned circumstances.

Investments in gold can be done in many ways. They are as listed below:

An investment in gold bullion, which basically represents pure gold, is the most traditional method of owing the metal. Since ancient times, empathy for gold has been based on the faith that it is the only form of genuine money whose monetary merit will remain unaffected by government fiat. Investments in gold coins and gold bars are widely done. Examples of gold minted coins are the one-ounce South African Krugerrands, Canadian Maple Leafs, or American Eagles. But owning of gold cannot give quick profits as there is requirement of a sizeable price difference between the bid and the ask price; from purchasing at a retail shop and selling at wholesalers, which needs some time to elapse. Still, it has a preservative worth that outweighs the above condition.

Gold Mutual Funds: Many mutual funds invest primarily in the shares of gold mining companies. Such gold mining stocks of reputed senior mining companies are other ways of investments and more advisable than either having possession of the yellow metal or buying small shares in young companies, because here, your investment portfolio can comprise stocks of these senior gold mining companies which are known to give good returns and it is to be expected that the profits will continue to be delivered in the future as well. Now if we consider junior gold stocks, most of them are hardly likely to own their own productive mines. Still, the potential returns are high and for the same, there are many takers for such investments; those who are ready to risk the relatively low capitalizations as compared with those of senior stocks.

Gold Exchange-Traded Funds or ETFs work on the principle of the mutual fund that trades similar to an ordinary stock on a stock exchange.

The Gold Options market is relatively intricate. It involves a lot of conjectures, like expectation of a rising price in gold on buying a call or expecting it to fall on buying a put. In the former case, the purchase price is fixed by the call in such a manner that there is a widening in the fixed option price and the prevailing margin price when the purchase price elevates. Buying options is a precarious business. As options expire in a stipulated time period, quick decisions often lead to big losses and many a time, these losses far over-shadow the gains, but the plus point is the control of sizeable investments with low capitals.

Thus investments in tangible assets like gold are advisable during this period of market uncertainty, when the doom of recession is just around the corner.