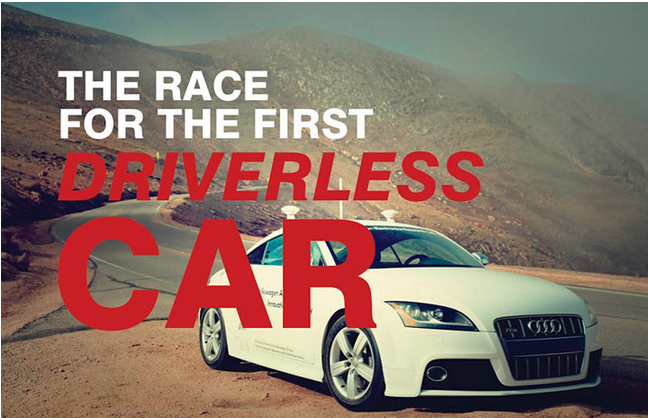 Car Manufacturers are bow actively and fiercely developing and investing in driverless car technology. Although it might be a while until we see these vehicles on our roads, testing has already began and no one wants to be left behind. Some of the most noticeable car brands that are developing their own drive-less vehicles include Ford, Volkswagen, BMW, Audi, Toyota and even the likes of Google are joining in to!

Nevada is the first state which has approved the use of autonomous vehicles. It opens up new doors to the legal aspect of liability, when it comes to any eventual accident. Who will be held responsible? The car owner or car maker? These are matters that are yet to be defined.

The following infographic was carefully designed and used extensive research to compare the development stages between the main manufacturers who are looking to commercialize the technology. There are two speedometers displayed, one that shows you the chance of commercialization, and the other which displays the technology development. Excellent factors to determine who is most likely to begin mass production and to actually start selling these autonomous vehicles to our everyday motorists.

The following infographic which was designed by Car Loan 4U will give you a good understand on the technology that is being developed and who is most likely to bring these cars to market.

4 Great Benefits Of Using A Flexible Workspace For Your Business

Why You Should Open Your Own Store